As part of Mental Health Awareness Week 2018, Reachout Member Clare Jackman shared with us her moving story of bereavement and how stress control through creative and wellbeing activities at Reachout helped her recover personally and socially.

Seven months ago my whole world came to a shattering halt when my wonderful husband Cliff Jackman died very suddenly and unexpectedly at the age of 49. It was the night before my 49th birthday, he had not been ill and came home from work a happy man as usual. Later that evening he told me he had a pain in his chest and things escalated rapidly. Although I phoned 999 almost immediately the ambulance took 45 minutes to arrive by which time he could hardly breath and was in and out of consciousness. Tragically he went into cardiac arrest on our sofa before they managed to assess what the problem was and he died in the ambulance outside our home.

To say I was completely shocked and devastated is an understatement, he had been my whole world for over 26 years and I couldn’t imagine life without him. With the help of good friends and family I managed to plan and get through the funeral in a surreal daze. The weeks and months that followed were spent in a bubble of grief, I could not see a future and didn’t want to have a future without Cliff in my life. I was determined to grieve fully and feel everything, however painful. I did not do anything to block out my emotions such as drink, drugs, antidepressants or work. Luckily, I have done a lot of reading and research into trauma, loss and grief with the work I have done over the years with traumatised children, so I had a good understanding of the most positive ways to heal from my own trauma. I was able to feel and express my emotions and talk about them to friends who have been so patient and supportive.

My good friend Lesley Arthur from Reachout with Arts in Mind was a great support and suggested that I might benefit from joining Reachout. To begin with I was unsure about this and didn’t really think I was someone who would ‘fit’ the criteria. I had been struggling with getting out and doing the simplest of tasks such as going to the supermarket. I would put it off for weeks, then walk around in a painful daze, trying to hold back the tears whilst looking at meals for one instead of packs of meat and veg that Cliff would then create into some amazing meal. My friends would encourage me to go out and do things with them and I enjoyed getting out of the house and their company, however the time would always come when I had to go home to my empty house where Cliff had died on our sofa. I think I was being re-traumatised every time I got home and began having panic attacks.

About two and half months ago Lesley asked if I would be interested in attending some stress control classes they were holding at Reachout for staff and members. ‘Stress control’, was devised by Jim White, a clinical psychologist in Glasgow, and is now being used both in this country and across the world. Comforted by the fact Lesley would also be attending I decided to give it a go. I had done a lot of work on stress management in my job and didn’t really think I would learn much, however I was proved wrong. The sessions were so clear, each one focusing on a different part of stress. It was a six-session course at one hour per session, and I was relieved that it was not a class where we would be expected to talk. The sessions covered: Learning about stress; controlling your body; controlling your thoughts – cognitive therapy; controlling your actions – behaviour therapy; controlling panic; controlling sleep problems and controlling the future. After each session we would be given a booklet and encouraged to try the strategies we had been given in that session.

Almost immediately I could feel myself improving. The staff and members at Reachout were so welcoming and there was a very calm, therapeutic atmosphere which put me at ease. Getting out at a regular time each week was good for me and I gradually felt like I was re-joining the world.

I was then given the opportunity to join a portrait painting class at Reachout with artist Jacqueline Marr. As I has studied art and design after leaving school, I was keen to start painting again and knew it would be a therapeutic class for me to join. Cliff was an artist and I felt he would like to think of me painting. The class had various levels of experience and skill and Jacqueline was great at managing everybody’s differing needs. I had bought a large canvas and printed a photo of Cliff which I wanted to paint.

As I already had some skill and talent Jacqueline let me get on with working on my portrait almost immediately, coming over every so often to guide me in the right direction. I quickly saw my talent returning and was pleased with my progress from the offset. I felt like I was bringing Cliff back to life. The sessions were once a week for 2 hours, although I usually stayed on longer as I was so focussed on my painting. I took photos of the different stages of my painting each week and was brave enough to post these on Facebook most weeks to show my progression. The response to my painting from friends and family was incredible and I could feel my confidence and self-esteem growing each week.

Joining Reachout has been probably the best thing I could have done at the time I did it. I now feel like I have a future again and am starting to see the joy in life and feeling in touch with the world and willing to try new things.

I would like to thank the staff and members at Reachout for all their help and support over the weeks I have been attending, and especially to my wonderful friend Lesley Arthur who has helped me more than she will ever know. I am now in a position where I feel ready to go back to work and may not need to attend any more sessions, however it is a comfort to know it is there for me if and when I do. 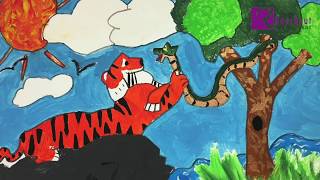 A Wonderful Morning at Play Alloa

Vote for us! Sainsbury's Local Charity of the Year

A Huge #VolunteersWeek Thank You!